Yesterday's historic attempt to land the Falcon 9 on the Autonomous Spaceport Drone Ship (ASDS) was scrubbed due to unexpected drift in the Z-axis thrust vector control actuator (a what?) on the second stage Merlin Vacuum engine.

For the non-engineers: the actuator is just a big piston used to steer the Merlin rocket engines.  The specific part in question is probably this one below (details stolen directly from JASC's web page.) It is powerful, very precise and has a built-in function to report exactly how far the piston is pushed in or out.  This is connected directly to the rocket motor (see picture below) and so it tells the computers what direction they are currently pointed. 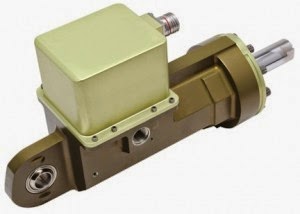 
This actuator was designed to control the thrust vector angle on the SpaceX Falcon 9 first- and second-stage engines.  It is designed for high vibration and shock loads, and has excellent frequency response characteristics.  It also was designed for short-term immersion in salt water, as evidenced by the protective cover on the electro-fueldraulic servo-valve (EFSV) and hard anodic coatings.  Redundancy is accomplished via dual-coils in the EFSV first-stage torque motor.
Embedded within the single-ended piston is a dual-element LVDT, which provides two independent channels of position feedback to the external controller.  A single D38999 Series III connector on the EFSV housing communicates all signals to and from the controller.  An optional electronic control unit (ECU) is available.


Late in the count-down yesterday, the computers reported drift (uncontrolled movement) in the actuator.  Probably, one of the countdown tests was to swivel the second stage engine around.  The computers then measure the signal back from the actuators to insure that engine is pointed exactly where the computers told it to point.  What likely happened was that the engine was slowly moving after the computers instructed it to stop.  That's bad. So, the countdown was halted.

Below is a picture of a first-stage Merlin 1D engine where you can clearly see one of the actuators.  I don't know which one might be Z axis and it might look a little different on the second stage engine, but overall it doesn't look that hard to replace ...

Except that the bad actuator is HERE at the top of the rocket, inside the interstage shroud ... 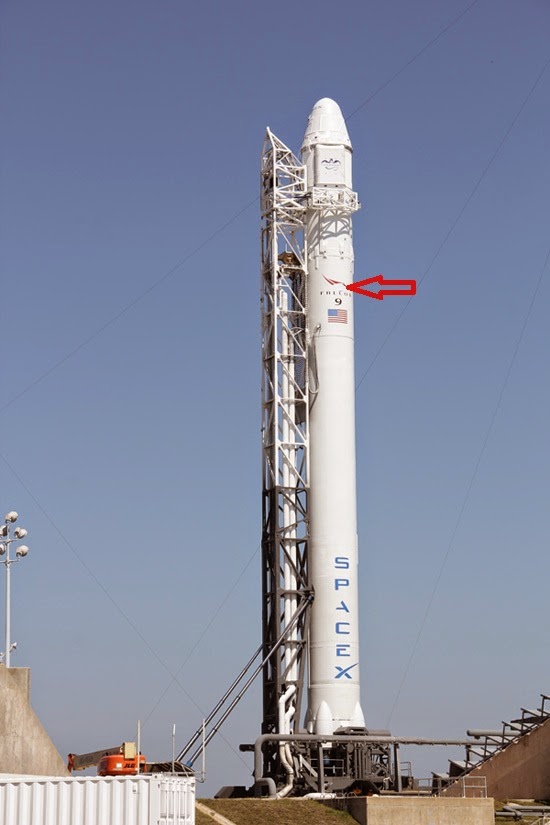 I'm not sure who gets to crawl inside the interstage to replace it, but I'm glad it's not me.  Hopefully it can be done without lowering the rocket and separating the second stage which seems like a lot more work. (Note: the pic above is actually a V1.0 Falcon so the interstage is a little different, but you get the idea.)

If the all goes wells, the next opportunity to catch the space station -- and possibly land the first stage on the ASDS -- will be Saturday (1/10) at 4:47 AM.

For those who have asked, No the landing will not be seen live.  Apparently, we don't have telescopic TV cameras and video/internet feeds in the middle of the Atlantic.  Plus, it will be really dark at 5 in the morning.

Posted by Scomage at 2:09 AM No comments:

On Tuesday morning (Jan 6), the ambitious young company SpaceX is poised to attempt something that has never been done before. They want to take control of a rocket that is already to the edge of space, turn it around and land it back on earth.

So what? Countless books, movies and TV programs have shown us flying to another planet in our rocketships and descending tail-first to the surface. Didn’t we land on the moon that way more than 45 years ago? Well yes, but the lunar lander was a very small vehicle and we brought it to the moon by piggy-backing on a much larger rocket that we ditched in Earth’s atmosphere.

Other than in fictional stories, we (earthlings) have never launched a rocket large enough to bring stuff to space and brought it back here to land in an upright position. Why? Because it is really, really hard. When the Falcon 9’s main engines are done lifting some badly needed supplies most of the way to the International Space Station, the rocket will be streaking 60 miles above the Atlantic Ocean at a speed of 4,100 MPH. That's where it gets exciting.

The rocket’s second stage will separate, fire up its own engine and continue to the space station. At the same time, engineers will turn the 14-story first stage around (at six times the speed of sound), relight the engines three different times to slow it down and land it on a floating barge the size of a football field. Elon Musk, the founder of SpaceX, describes this as "tricky" – possibly winning the prize for understatement of the decade.

Besides the obvious “why would somebody try to land a rocket on a floating platform?”, a bigger question is “why is this a big deal?” The first answer is the crazy notion of us actually traveling to another planet. In order to get astronauts and their gear to Mars, we need to be able to successfully land on the surface. The Martian atmosphere is so thin that parachutes or space planes (like the Space Shuttle) are impractical. I suppose we could fly a rocket-propelled sky crane to the red planet and gently lower our supplies to the surface -- as if that would ever work -- but more likely, we would just land using the same rocket technology that got us there.

While the thought of humans on Mars is intriguing, how does this help a commercial space company? If SpaceX can indeed create a reusable rocket, the cost of launching humans and equipment into space will come down significantly. Musk thinks it may lead to a 100-fold decrease in costs, which seems a little far-fetched, but even a 10-fold decrease is a game changer. Not many folks can afford a $200,000 Bentley, but a lot of folks can buy a $20,000 Chevy.

The Russians want to charge $70 million per seat for a ride to the “International” Space Station, but how many countries, including ours, can really afford that? What if SpaceX can do it for $7 million or launch a satellite into low earth orbit for $5 million – or even $1 million. Does Sweden or South Africa or Chile have their own space program? The answer may quickly change from No to Not Yet.

What types of new inventions or discoveries will we see if every Fortune 1000 company, and many even smaller, can afford access to space? Worldwide wireless internet? Storm and disease mitigation? New metals, fabrics and computers? The possibilities are as endless as, well, space.

Of course, the chances are pretty slim that SpaceX will land the Falcon 9 successfully on the first try. As the folks at Orbital Sciences found out, there is a chance it won’t even leave the launch site. So, January 6, 2015 may not make it to the same league as April 12, 1961 or July 21, 1969, but we could still be witnessing history. The year 2015 could mark the begging of a new, affordable era in space exploration.

And, that's the big deal.

The FCC has extended the Open Internet comment period until Fri 7/18.